Bhubaneswar is one of the famed cities of Odisha; it is the capital of the state. The city is among one of the oldest cities of India, finding its origin around the 2nd century B.C during the Chedi dynasty.  Bhubaneswar got its name from Tribhubaneswar meaning Lord Shiva. Since the establishment of the city, Bhubaneswar has been known by different names; Toshali, Nagar Kalinga, Kalinga Nagar, Ekamra Kanan, Mandira Malini Nagar are a few. The City of Temples is the largest city in Odisha, serving to be one of the centres of religious and economic importance in Eastern India.

Kalinga architecture spans the entire city. Bhubaneswar together with Konark and Puri forms the Swarna Tribhuja or Golden Triangle, the most visited destinations in Odisha. In 1948, Bhubaneswar replaced Cuttack as the capital of the state. German architect Otto Kongisberger then designed the city in 1946. It is considered as one of the first planned cities of modern India along with Chandigarh and Jamshedpur. In modern India, Bhubaneswar is a Tier 2 city, developing quickly as one of the education hubs. It caters to more than 1.4 million people today. 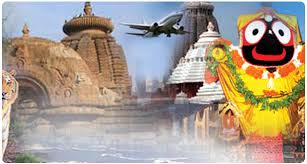 Bhubaneswar has a long line of history and it dates back to the 1st and 2nd century. Before the modern city emerged, the old city was of vital importance. The various historical monuments in and around the city are evidence of that. The first mention of the city was made during the Kalinga war. Other than Hindu temples, there are Jain and Buddhist temples carved during Ashokan rule around the city, which proves the importance of the city during different era.

Repeatedly the city testifies its importance in history during the 7th to 11th centuries. Many empires have built temples in this city dedicated to various deities of the Hindu gods. Later in 1936, Cuttack became Odisha’s capital.  However in 1947 due to vulnerability to flood; Cuttack no longer remained the capital of the state, instead Bhubaneswar gained the title and remains so.

Located in the Eastern coastal plains, the city is situated in an average altitude of 45m above sea level. The city is visited by the Mahandi River in the north, Daya River in the south and Kuakhai River in the east. Topographically the city is divided into the eastern lowlands and the western uplands. Bhubaneswar is one of the rapid growing cities; the urban development area in the city consists of the municipal corporation area, 173 revenue villages and two other nearby municipalities. The city can be broadly classified into different areas, which namely consist of the old city, the new planned city, added areas, and other peripheral areas. Bhubaneswar is blessed with a tropical savanna type climate. The annual mean temperature is 27.5 centigrade. May and June are one of the hottest months the city experiences and winters lasts only for ten weeks. The city experiences southwest summer monsoon brought by the rains from Bay of Bengal. All over, the city experiences a pleasant climate throughout the year.

Tourism plays an integral part of Odisha. Bhubaneswar has a cluster of places to be visited. Every year millions of people from the country and outside the country visit the various sightseeing places in Bhubaneswar. Some of these notable places include the Old town, Lingaraja temple, Bindu Sarovar, Khandagiri and Udaygiri, Dhauli Giri, Nandankanan zoo, Mukteshwar temple, Odisha state museum and many more. Each place has its own specialty and its own history, which is quite interesting for tourists to learn. They also form an integral part of the culture and history of Bhubaneswar and Odisha. A generally peaceful city, Bhubaneswar is one of the greenest cities. If you are planning to visit the city then October to March is best time to do so.

Temple city of India, Bhubaneswar had over one thousand temples. An architectural legacy this place has some great attractions that can invoke the inner austerity of a person. From Lord Vishnu to Lord Shiva, Bhubaneswar testifies the various temples located here. Some of the notable temples worth visiting are:
There are thousand other temples and shrines located in this city. Any traveler looking for a religious tour can visit all of them. While there are some temples, which cannot be missed even if the travel is short, and meant for a casual outing. Other than temples this city offers many other types of sightseeing places to see. These places too contribute in the making of Bhubaneshwar's culture.

Bhubaneswar offers a choice of food for all foodies. Seafood being the specialty of the city, there are other epicurean delights available. Rice and fish curry is the staple food here and they are available in different variations. Lobsters and crabs are found in abundance here, which makes this place a seafood paradise for tourists. Street food is another specialty of this place. Food items like Gupchup, Cuttack chat, Bara Ghugni are quite famous among local people as well as everyday tourists. Another traditional recipe known as Dahi Pakhal is eating during the summers for taste and health during the hot summers. Equally, for vegetarians, this place is a food delight. While visiting Bhubaneswar, items like kora-khaii, pitha must be tasted. Sweets are an integral part of Bhubaneswarites diet; here a lot of tasty sweet delight waits for all.

As the capital of Odisha, Bhubaneswar is a prime hub and connecting route to all other locations of the state. The OSRTC or Odisha State Road Transport Corporation head office is located here.  From state government buses to private operator run buses, all can be found here. Bhubaneswar connects to Andhra Pradesh, Jharkhand, West Bengal and other neighboring states. The city is well connected with NH-5.  The city is renowned for its well-formed wide roads that run smooth. Auto rickshaws and cycle rickshaws are present throughout the city for local transport.

Other than buses and cars, this place is connected with railways and airports. The East coast railway has its headquarters based here. There are five railway stations located in this city; they are Mancheswar, Vani Vihar, Patia Halt, Bhubaneswar station and Lingaraj Temple road. The Biju Patnaik Airport is located 3 kilometers away from the city. The airport is now upgraded to an international airport connecting Middle East and Southeast Asia.

Odisha is famous for Rath Yatra festivals, and being a part of Odisha, Bhubaneswar is no different. A very famous festival celebrated here is the Ashokastami. In this festival, the deities of the Lingaraja Temple are taken to the Mausima temple in a highly decorated temple car procession.  The deities are then kept there for four days. This festival is celebrated in the month of March and April.

Another important festival that is worth mentioning is more like a fair. Adivasi Mela is a fair that displays different adivasi handicrafts products for sale. The tribal inhabitants of the state get their fair share of chance to display their hard work and talent. The city also hosts other festivals, which are equally famous and visited by thousands of locals as well as tourists.

Bhubaneswar is mainly an administrative city and a tourism city. Tourism plays a vital role in the economy of the city as well as the state. The city has also emerged as one of the fast growing commercial hub. As per economic studies conducted in the year 2011, this city was highest to offer employment opportunities. Many major multinational corporations, NASSCOM registered companies are located here offering the city youth with employment opportunities and the state with economic growth. The city also caters to small and mid-sized IT companies and other business to have their start ups here.

Bhubaneswar is the home to many major state administration and civic administration body. The city is looked after by the Bhubaneswar Municipal Corporation, which takes care of 60 wards. A councilor for the sixty different wards is selected every 5 years. The Bhubaneswar Municipal Corporation works on the orders discharged by the Mayor. The Commissioner heads the executive wing of the BMC.
The Odisha Home Legislative Assembly is based in this city. The city also has two lower courts located for all judicial processes. Other than these administrative bodies, Bhubaneswar-Cuttack Police Commissionerate is also located and functioning from here.