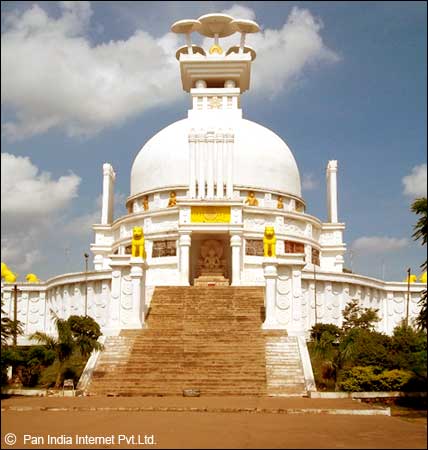 The Dhauligiri Hills are situated on the banks of the river Daya almost 8 km towards the south of Bhubaneswar. This is the place where the famous battle of Kalinga was fought. It is a hilly area where a large open space is attached and has a rock edict erected by the great king Ashoka of Maurya Dynasty. When Ashoka noticed that the Daya River had turned to red with the blood of the Kalingan martyrs, he renounced the act of war for good and embraced Buddhism. The violent bloodshed led Ashoka to change his mind, after which he had laid down the means of violence for ever and accepted a life of Ahimsa in the form of Buddhism.

After crossing the Daya River Bridge, one can notice and enter the Dhauli Giri Shanti Stupa towards the right side. After the famous Kalinga War was over, Emperor Ashoka gave up all kinds of bloody battles, accepted Buddhism and became a dedicated ambassador of peace and non-violence. Located in the Khurda District of Orissa, the preserved edicts of Ashoka stand testimony of the change of his heart.

The universal symbol of Lord Buddha, a chiseled elephant, stands on top of the rock. Through these Kalinga edicts, Ashoka expressed his concern for the 'well-being of the entire world'. The earliest Buddhist sculpture of Odisha is the rock-cut elephant above the edicts. The emperor had also asked his fellow administrators to rule with the concept of equality and also with compassion which is the main basis of Buddhism.