Bhubaneswar is one of the upcoming and active city of India. The city cordinates at 20.27°N and 85.84°E and is situated in the eastern coastal plains. In the southwest of the city lies the Mahanadi River. At an average altitude of 45 m (148 ft) above sea level it is also surrounded by the Daya River and the Kuakhai River in the south and east respectively. Chandaka Wildlife Sanctuary and Nandankanan Zoo lie in the western and northern parts of Bhubaneswar. River Mahanadi that waters the region forms the northern boundary of Bhubaneswar metropolitan area.

Bhubaneswar experiences a tropical weather climatic conditions. The city always experiences cold waves and heat waves coming from the north of the country. The summers are hot and the winters are dry. Bhubaneswar experiences summer from the months of March to May. The hot and humid temperatures often shoot to 40 degrees centigrade in the month of May. Though the summer ideally lasts for a longer period of time, yet there is a noticeable change in the weather due to the advent of the monsoons. The monsoons are awfully humid. 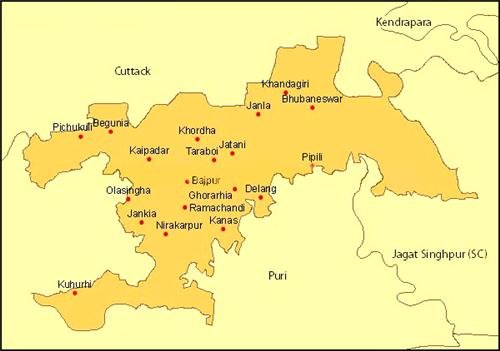 However, when the rain descends the climate is instantly cool and pleasant. During June the south-west monsoon lashes Odisha. July and August receives the maximum rainfall. During November the weather becomes much pleasant. Cold air gives Bhubaneswar a nice time. December and January are chilly because of the chilly winds descending from the north and north-east. The temperatures then drops to 15 degrees centigrade. If you plan to visit Bhubaneswar, the ideal time would be from October to April.

According to the census of 2011 India, Bhubaneswar had a population of 837,737. The metropolitan area had a population of 881,988. The number of males in the area was 445,233 while the female members are 392,504. Literacy in the city has also increased. Male members of the society are said to 95.69 percent while for females its 90.26 percent. According to the reports of Bhubaneswar-Cuttack Police Commissionerate, in 2011 the number of crime incidents reported in Bhubaneswar was 3,350, decreasing from 4,417 incidents in 2010. The population of Bhubaneswar mainly comprises of Oriya, however other members of different sects like Marwaris, Bengalis, Telugus also reside here. Growth in the education sector and Information technology sector has brought in business development to the city. Owning the development, more people are coming in to the city in search of job and settling here forever.


Bhubaneswar at a glance