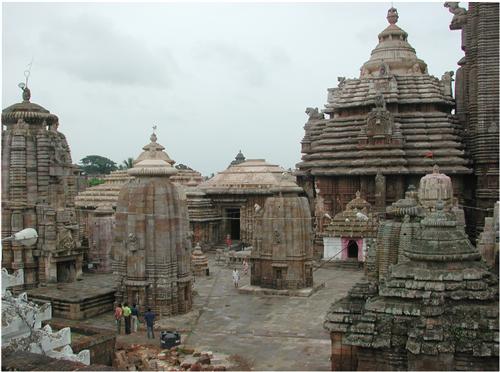 It is believed that the temple was built by the rulers of Somavamsi dynasty and later reconstructed in certain areas by the Ganga rulers. The central tower of the temple alone is 180 ft tall. Built in Deula style this temple has four essential divisions. These four divisions are known as vimana (the sanctum structure), jagamohana (the assembly hall), natamandira (the festival hall), and the bhoga-mandapa (hall of offerings). Enclosed within the temple area there are 50 other shrines of different Hindu deities.
Historical evidences trace that the deity of this temple was located under a mango tree. Unlike most other temples located in this city, this temple worships Harihara, who is a divine combined form of Lord Shiva and Lord Vishnu. The Archaeological Board of India and the Temple trust board maintain the temple. Six thousand people in an average visit the temple every day.

History of the Lingaraja Temple

The history of this temple dates back many centuries. However, to learn that it is necessary to understand a little more about the temple through a different perspective. Lingaraja means the king of lingam; or the symbol for Saivism. Lord Shiva was worshipped in different forms; these forms include Kritivasa and Harihara. Together these forms were known as the Tribhubaneswar meaning lord of the three realms. This temple as we know is dedicated to these forms of Shiva and the main deity here is Tribhubaneswar.

Dating back to 1100 years, this temple was initiated by Lelat Indra Kesari. Through there have been speculations by historians on this fact, some are of the opinion that the temple has been made during the 6th century. The Lingaraja Temple was completed in parts and by different dynasties or kings. By the time the temple was constructed completely, the Lord Jagannath cult in Puri has spread. The Somavanshi King Jajati Kesari built the temple when he shifted his capital from Jajpur to Bhubaneswar. There are many inscriptions visible in the temple wall giving travelers an idea of the various types of gifts and offering made to the God in the temple. Visiting this place is a visit to Bhubaneswar’s history.

In 1808-86 James Fergusson noted that the Lingaraja temple is “one of the finest examples of pure Hindu temple in India”.  The temple is enclosed within a compound wall measuring 520 ft by 465 ft. The temple faces east. It is built of laterite and sandstone. The main entrance of the temple is also located in the east. It is built in the Deula style, which mainly consists of Vimana, Jagamohana, Natamandir and Bhog mandapa. The natamandir in later centuries became more common and important due to the devdasi system that existed during that time.

The Hall of Offering or the Bhogamandapa measures 42 ft from inside and 56.25 ft from the outside. It has four doors from each side. The exterior is decorated with carvings of animals and men. The structure has a pyramid roof that has an inverted bell on top.   The festive hall is 38 ft from inside and 50 ft from outside. It displays sculptures and carvings of couples all over the wall. The hall also has flat roof sloping in stages. The main sanctum inside is square. The entire tower is sculpted with figures of women in different poses.

It is believed that an underground river originating from this temple fills the Bindusagar Tank.  The water in this tank is therefore believed to be holy. It heals physical and spiritual illness. Many pilgrims travelling to this city believes this tank to be holy, and taking a sacred dip during festivals.

The main festival celebrated here is the Shivratri. The festival is celebrated every year during phalgun month as per Hindu calendar. During this festival pilgrims fast the entire day and offer bel leaves to the deity. The fast is usually broken by the devout after a huge lamp known as the Mahadipa is lit. The main celebrations happen at night when the devotees sing in praise of the lord the entire night. Another festival celebrated here is the chariot festival. This celebration is known as Ashokastami. The deity of the temple along with its sister Rukumini is taken to Rameswar Deula temple in chariots pulled by thousands of devotees. Dances and communal feasts are organized in mood of the festival and celebration.

The temple staff responsible for the temple practices follows a long list of diligent routines. These routines are a part of Hindu mythology and are generally practiced in different versions for a complete submersion to go. The image of the Lingaraja is ablated several times a day and decorated with candles, flowers and other holy things. The idol is worshipped with Tulsi and Bilva leaves, as the god is believed to be both Lord Vishnu and Shiva. The God is also offered food offerings like cooked rice, curries and sweet meats.

Every day the deity is offered food of offerings of different kinds several times a day. All items are vegetarian and made from pure goods. From curries to sweets, the lord is offered items as snack and as heavy meals. These offerings to Lingaraja are then transferred to goddess Parvati.  It is believed that the deities accept the offerings after which they are distributed among followers and travelers as prasad. The Lingaraja is bathed, and decorated with holy water and clothing. From time to time, the deity is offered aarti (the ceremony of waving lights), along with it Sanskrit slokas are chanted to please the god. Each ceremony in the temple is followed by recitation of mantras and ritual observances. A day spent in the temple appeases the soul and brings one closer to the divine.

Administration and Staff of Lingaraja Temple

The founder of the temple King Yatayati Kesari, assigned the Dravidian Brahmins as the temple priests. The Dravidian Brahmins have more knowledge in Saivism and they believe in the supreme power of Lord Shiva.  The entire community was believed to be a part of the set up of the temple. The temple rituals and practices were changed from time to time, however it is observed by historians that 41 different tasks were assigned to a total of 22 separate caste members.

Nowadays, there are only two castes of Brahmins, the Brahmin Nijog and Badu Nijog. The Badu’s are non Brahmins who serve the god. They undergo three different rituals of ear piercing, marriage and god touching before they start serving. The work they perform includes Pohcha, pahada and khataseja.  From 1962, the ritual of khataseja is not practiced anymore.

The temple is guarded by security personnel from  Bhubaneswar Police. The security guards are assigned by the temple authorizes. The Archeological Survey of India and Temple Trust Board maintain the shrine. The temple gets its annual income from the donation boxes and collections taken from nearby shops and stalls.