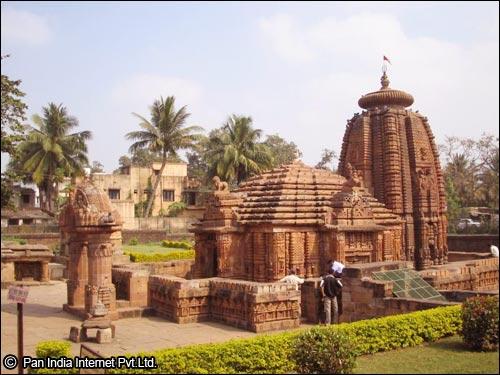 Also known as the Mukteswara deula, the Mukteswar Temple of Bhubaneswar is a very old and famous temple which was built in the tenth century. This temple is one of the earliest works from the Somvamsi era. Scholars state that the Mukteswar Temple was built in 950 CE. The presence of torana makes it unique since no other temple contains it. The brilliant architecture makes this temple one of the monuments to take pride at. The main temple was constructed in a lower basement amidst a group of other temples. The pyramidal roof of the temple can be said to be the first of its kind over the usual conventional two tier structure.

The Mukteswar Temple is one of the smallest and compact temples in Bhubaneswar. It stands at 34 feet tall height. But the stone archway and the ceiling with eight petal lotus in its porch, the carved images- these are all unique and said to have appeared for the first time in the history of temple architecture. The diamond shaped beautiful windows at the North and South walls of Jagamohana depict captivating scenes of frolicking monkeys. The chaitya-windows carved on the sanctuary tower reflect an enchanting ornamental design- bho, a motif-the grinning face of a lion with beaded tassels emerging from its mouth, flanked by two dwarves, the pattern resembling a coat of arms. The corner rathas are relieved with female figures, remarkable for their expressive faces, with hair styles and jewellery shown in exquisite detail. The octagonal wall enclosing the temple has several niches, each containing a wheel, a lotus medallion or a delicate scroll.

Mukteswar literally means “The God who can give freedom through Yoga”. Here it means the Mahadeva or the lord Shiva himself. There many sculptures of him in various meditation or teaching poses. The compound wall has images of popular Hindu Gods like Saraswati, Ganesha and Lakulisha. Within the Chaitya arches, many images of Lakulisha can be seen in miniature forms that can be seen posing in mudras like yoga, bhumispara and vyakyana.

The Department of Tourism of Odisha organizes a yearly dance event called the Mukteswar Dance Festival in the temple premises every year. It mainly focuses on Odissi dance and music and there are solo, duet or group performances in the event. In general it is organised in the month of January.