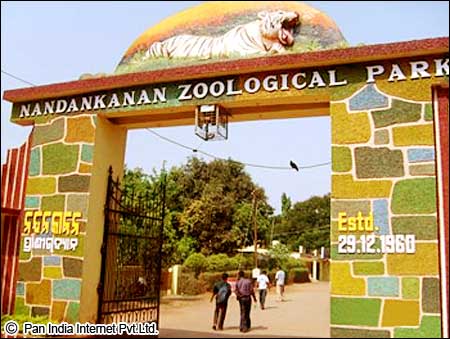 The Nandankanan Zoo in Bhubaneswar is located in the Chandaka Forest, on the beautiful banks of the Kanjia Lake. It is also known as the “Garden of Gods”. It overs an area of Krishnanagar and Jujhagarh Demarcated Protected Forests and the nearby areas of Baranga Railway station on the Howrah-Chennai route. Geographically it is located between 20o 23' 08" to 20o 24' 10" North latitude and 85o 48' 09" to 85o 48' 13" East longitude.


Endangered species like Black panthers, gharial crocodiles and white tigers are some of the wild animals that exist in the zoo. The zoo is a home to over 67 kinds of mammals, 18 varieties of reptiles and 81 species of birds that co-exist in the deeply forested boundaries. For gharial crocodiles, a captive breeding centre is also there within the zoo campus.

The statistics say that almost 1660 individual animals representing more than 110 species, including 40 species of mammals, 53 species of birds, and 24 species of reptiles are residents of the zoo. A rare white tiger breeding also takes place at the zoo. Asiatic ions, Indian crocodiles,   Nilgiri langurs and countless number of birds, reptiles and fish are can be seen within the zoo. There are 34 aquaria in the zoo campus that contain a large variety of fresh water fish. The entrance to the Reptile Park is adorned with a replica of a life-size tyrannosaurus.

The Zoological Park is spread over an area of 400 hectares. It was opened for the public in the year1979. Renowned to became the first zoo in India to join World Association of Zoos and Aquariums in 2009, it also contains a botanical garden. Literally meaning 'The Garden of Heavens', the zoo area includes the 134-acres Kanjia Lake. Reptile Park is home to numerous species of crocodiles, lizards, turtles and snakes.

Adopt-an-Animal programme was started at the zoo in 2008, to help involve the general public in animal conservation and raise money. In the zoo, tourists can find facilities for boating and forest safaris.