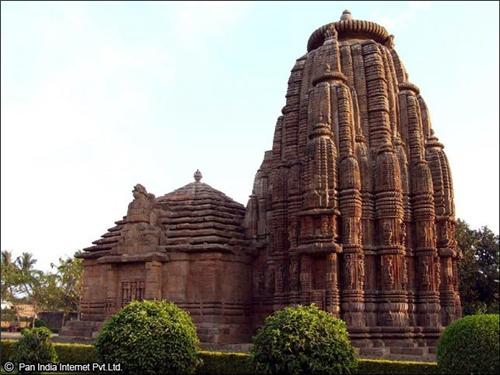 The Rajarani temple is one of the most well known and famous temples in the city of Bhubaneswar. This temple was built in the 11th century, almost eleven hundred years ago, but it still holds the majestic view and grand structural beauty. This temple was earlier known as the Indreswara or also as the “love temple” in the local language.

The significance of the name itself is very unique. Raja means the king and Rani means the Queen. It is built on an elevated platform with two structures, a central shrine- the vimana (sanctum) with the bada (the curvilinear spire) above its roof rising up to a height of about 59 ft. This temple is well known for its tall and slender figures carved in style and beauty.

The chief deity of the Rajarani temple is Lord Shiva (Mahadeva). There are various kinds of sculptures in the walls around the temple and the vimana which depict the scenes of the wedding of Shiva and Parvati, tall slender sophisticated nayikas depicted in various roles and moods such as turning her head from an emaciated ascetic, fondling her child, holding a branch of tree, attending to her toilet, looking into mirror, taking off her anklet, caressing her pet bird and playing instrument, Lord Nataraja etc. The Rajarani temple is maintained by the Archeological Survey of India (ASI) as a ticketed monument. The temple is an amazing example of architecture during the Kalinga Rule.

There are beautiful gardens and parking spaces in the Temple campus making it a comfortable place for the visitors. In spite of being old, the campus is clean and well maintained.