Bhubaneswar is not only the current capital city of the Odisha state, but it was also the capital of the Kalinga Empire in the ancient era. Since Bhubaneswar has a lot of temples, it is also known as the “temple city” of India. A few ancient temples in Bhubaneswar are perfect examples of Architectural genius. The temples of Bhubaneswar mainly follow the Lord Mahadeva or Shiva. From research and historical evidence, it can be said that most of these temples were built from the 8th to 12th century. In fact the city of Bhubaneswar forms a golden triangle with other two holy cities- Puri and Konark. 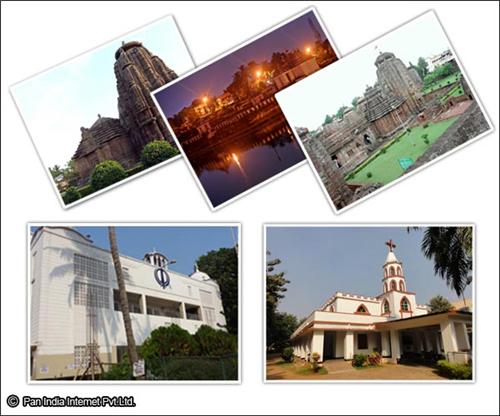 These temples and other places of religious importance attract thousands of tourists every year. There are more than 500 temples in Bhubaneswar, among which the main are Lingaraj temple, Mukteswar Temple, Bindu Sagar, Raja Rani temple and Vaital temple. The Lingaraj Temple is considered to be the epitome of Superb Indian architecture. This temple was built in the 11th century. The Raja Rani temple which was also built in the same era is a beautifully designed architecture dedicated to Lord Brahma.

There are also a few Jain temples, Churches and mosques in Bhubaneswar. This only proves that Bhubaneswar is a peaceful place where people from every community can live in harmony. You shall get more information about the religious places of Bhubaneswar on our site.