The capital of Odisha, Bhubaneswar is a prehistoric city which once was under Chedi rule admistered by emperor Sisupala. The city has been famous by various other names as well such as Kalinga Nagari, Toshali etc. The city is bounded by thick forests and abounds with verdant foliage. Bhubaneswar houses many renowned temples and hence it is also famous as the Temple City of India. Apart from the temples, Bhubaneswar has also witnessed many archeological excavations that have revealed various historical sites located in and around the city. The article highlights the top 5 historical places located in Bhubaneswar. 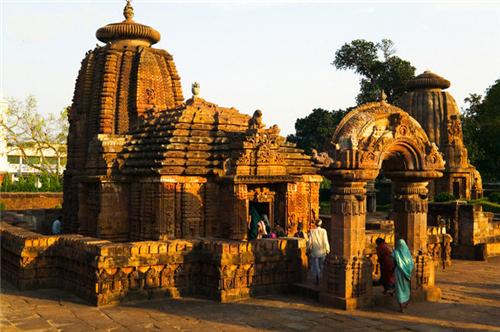 This monument dates back to 10th century. This renowned temple of Bhubaneswar is a true example of the archaic and contemporary Kalinga School of architecture and its structure depicts a perfect blend of both. Mukteswara Temple is nestled at the core of the city and is dedicated to Lord Shiva. The temple is well-known for its intricate sculptural works and exquisite carvings. The elaborate carvings done on the temple walls as well as on its halls portray a blend of Jain, Hindu and Buddhist inventive styles. The Mukteswara Temple is honored with an ornately decked stone arch at its entry which is an architectural wonder of the ancient times. The edifice of this temple is made of sandstone and the height of this enormous structure is 35 feet. The walls of the temple are adorned with renowned Panchatantra stories and sculptural patterns of numerous animals such as lions, elephants and monkeys. This temple is a must-see in Bhubaneswar which is a religious as well as a historical destination to get an insight on the ancient architectural styles of Odisha.

Dhauli Hill is situated approximately 8 kms away from the city of Bhubaneswar on the banks of River Daya. This place has a historical importance owing to its connection with the Kalinga War. Dhauli Hill is famous for the “Edicts of Ashoka” that can be seen here carved on an accumulation of rocks. One can also witness a rock-carved elephant which lies just above the Ashoka Edicts. The famous Kalinga War took place at this very place and after this brutal and deadly war Ashoka was touched by the massive slaughter and had adopted Buddhism. As per the legends the Daya River became red with the blood of the people who died in the battle. Thereafter, Ashoka realized the extent of terror linked with war which turned him into a supporter of non-violence. Ashoka constructed numerous stupas, chaityas and pillars in Dhauli. At the peak of the hill, a white colored pagoda known as the “Shanti Stupa” was constructed by the Kalinga Nippon Buddha Sanghs and Japanese Buddha Sangha during 1970s. The Shanti Stupa comprises a gigantic dome which is crowned with lotus petals. There are 5 umbrellas that lie on the even top and they stand for the 5 essential facets of Buddhism. This luminous white colored pagoda has 2 storeys and it rests on a platform which has 2 entrances along with flight of stairs. 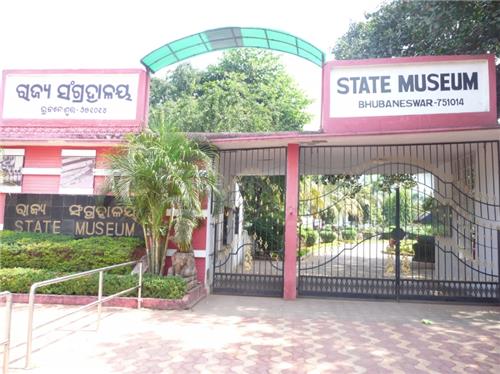 This museum gives an insight of the history of Bhubaneswar and Odisha and the numerous kingdoms and dynasties who have governed Odisha since the distant past. This historical museum was set up in the year 1938 and soon after it was moved to the present building in the year 1960. Earlier it was just an Archaeological museum which had a compilation of sculptures, numismatics, specimens of fine arts, terracotta and copper plates. Later, when people started showing interest in the museum, the antiques were rearranged in a methodical way. The museum houses more than 10 galleries which display a plethora of antiquities such as weapons & armory, archaeological objects, manuscripts, objects related to art & craft, prehistoric objects, stone sculptures and scientific tools. The museum also accommodates a library which abounds with a myriad of books that enlighten the history lovers, scholars and researchers about the culture, art and Indology of Bhubaneswar. The palm leaf manuscripts are a specialty of the Odisha State Museum. The museum remains open throughout the week except on public holidays and Mondays. The museum timings are from 10 AM to 5 PM.

These caves are partially natural and partially artificial and were constructed by Chedi Dynasty in the first century BC and following years. Being located in the vicinity of Bhubaneswar, these caves have historical, archaeological and religious significance. Both these caves are positioned on two hills namely Udayagiri and Khandgiri respectively and stand in front of each other on opposite sides of the road. One can witness numerous elaborately carved caves on these two hills. A majority of these caves were constructed during the rule of King Kharavela. It is also said that these caves were mostly built from the vast residential blocks of Jain monks. The Khandagiri Hill boasts of 15 caves, whereas the Udayagiri Hill has 18 caves. The Ranigumpha is the most notable monastery in Udayagiri which has 2 storeys. Besides, the Gaenshgumpha(cave no. 10) and the Hathigumpha(cave no. 14) are also quite famous in Udayagiri, owing to their collection of sculptures and also because of their historical significance. Rani ka Naur(or cave no. 1) is another broadly carved cave which is ornately adorned with the sculptural friezes. Khandagiri Hill offers a breathtaking view of the city of Bhubaneswar from its top. The cave no. 3 or the Ananta Cave portrays the carved bodies of athletes, women, geese and elephants with flowers in their hands. 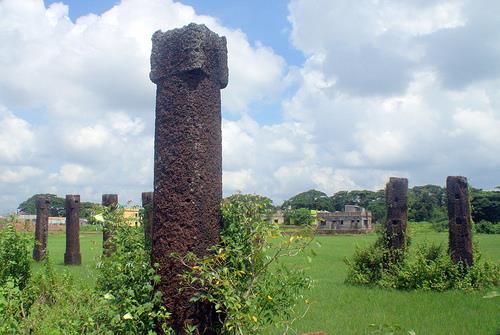 Shishupalgarh was earlier a city which presently exists in ruins and is situated approximately 13 kms away from the city of Bhubaneswar in the Khurda District of Odisha. The Archeological Survey of India unearthed the ruined fortification of Shishupalgarh and now it is one of the best protected historic fortifications of our country. The artifacts and architectural pattern that were revealed from the initial excavations tell that this renowned fortified city dates back between the third century BC and the fourth century AD. According to some latest excavations, this city thrived from fifth century BC and lasted even after the fourth century. In the year 1948, B. B. Lal performed the very first excavation at this site. The entrance of this place has two huge platforms with big square steps on 2 sides that surround a “Kutccha” pathway that opens in the direction of a moat. It was earlier a jetty cum entrance where the Shishupalgarh authorities used to accept the supplies for the inhabitants of the city. The gate used to be linked with a fortification on left side as well as on the right side. Located at a distance of just a few meters from this jetty there exist 18 pillars that were unearthed by a team of 12 archeologists between the year 2005 & 2008. These pillars still stand straight even after been engulfed by the remains for around 2 and half millenniums. Crowned with a wooden roof these pillars perhaps offered accommodation for social get-togethers. These pillars also have some holes where probably the wooden beams were fixed. Shishupalgarh has 4 entryways and the same number of auxiliary gates which enabled the citizens to stroll through the city even when the major entryways were shut down. During the excavations many beads, terracotta, ornaments, bangles, copper, iron knives, nails point and blades were discovered which reveal the likelihood that the residents of the city might have been extremely advanced. Archeologists also say that the city used to house 5 water tanks, 4 tanks being in the 4 directions and one being at the center of the city where people used to bathe and wash their clothes. Some excavations also reveal that owing to the Daya River flowing on the left of the Shishupalgarh city, this place must have had plenty of water sources.

If you are a history lover you must come and explore these amazing historical places of Bhubaneshwar!