Places to Visit in Bhubaneswar

Bhubaneswar is a thriving centre of art and culture which once was the heart land of the Kalinga Kingdom. Bhubaneswar is the current capital city Odisha state in the India sub-continent. The literal meaning of Bhubaneswar is- the Lord (eswar) of the World (bhuban). It is a city with hundreds of historic temples & also known as the “city of temples”. A few of the famous temples in Bhubaneswar where thousands of devotees flock every day are the Lingaraj Temple, Bindu Sagar, Shatrughaneswar Temple Mukteswar Temple, Parashurameswar Temple and Raj Rani Temple. 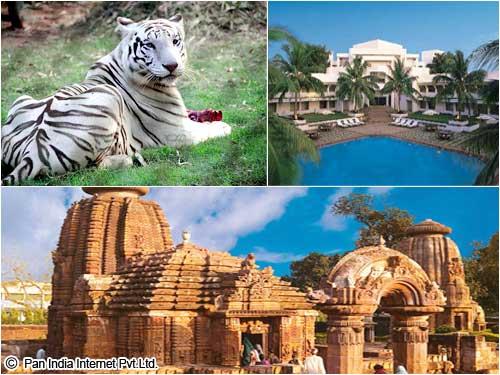 The city of Bhubaneswar was established in the year 1946 which was designed by the famous German architect Otto Konigsberger. Tourists from across the nation come to Bhubaneswar mainly for its perfect mixture of elements from the past as well as from the present. In Bhubaneswar, one can see ancient temples and monuments standing alongside the contemporary nightclubs and shopping malls. This city, which was once known for its grandeur architecture and temples, is currently a thriving centre for business and commerce. It is a part of the golden triangle formed by the three holy temple cities- Konark, Puri and Bhubaneswar, the city itself.
This exotic city is well known for its temples as well as appliqué work of Pipli, Ikat sarees, cane furniture and Bidri-ware. Art and craft are integral parts of this city life from ancient era. The world famous Odissi dance form has originated in Bhubaneswar. There are many popular forms of dance and music, both folk and modern which catch the hearts of the people.

How to Reach Bhubaneswar

The city of Bhubaneswar is well connected by air, rail and road to the rest of India.

By Air: The main airport is the Biju Patnaik airport which currently operates flights to and from these Indian cities- Chennai, Delhi, Kolkata, Mumbai, Visakhapatnam, Port Blair, Bangalore, Hyderabad, Coimbatore, Lucknow and Patna.

By Rail: The East Coast Railway has its headquarters itself in the city of Bhubaneswar itself. The Bhubaneswar railway station is one of the major stations on the Howrah-Chennai main line. It is connected to other major cities in India by regular daily express and normal passenger trains.

By Road: There are regular Volvo and other bus services to and from the city of Bhubaneswar. Bhubaneswar is connected to the other places by the National Highway No. 5 (NH-5).

Bhubaneswar can be visited at anytime of the year. But it is recommended that one should visit this place during the winters or between October to March.