Udaygiri and Khandagiri caves are one of the major tourist destinations in Bhubaneswar. These caves are part natural and part artificial caves that are of archaeological, historical and religious importance. Located near the city of Bhubaneswar, these caves are carved in two adjacent hills known as Kumari Parvat in the Hathigumpha inscription. The caves have ornate carves and have carved residential blocks, which were built for Jain monks stay and pray. The caves were built during the reign of King Kharavela. Udaygiri means “Sunrise Hill” and has 18 caves; the other hill Khandagiri has 15 caves. The main attraction however is the Ranigumpha, which is a double stored monastery in Udaygiri. 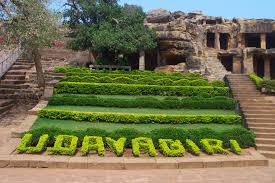 Over time historians have discovered several caves within these two hills, these caves are now opened for tourist visits. B.M Barua, found in line 14 of the Hathigumpha inscription that 117 total caves were excavated by King Kharavela. These caves were both present in Udaygiri and Khandagiri hills. Marshall found out 35 caves in both hill, while M.M Ganguli enumerated only 27 caves. At present there are total 33 caves visible for tourists, 18 caves in Udaygiri and 15 in Khandagiri. According to Archaeological Survey of India, the local names of existing caves are offered in a list for tourist’s knowledge.

There are many famous caves that can be found in Udaygiri and Khandagiri. Each important cave is famous for its various carvings and use. Cave 14, Hathigumpha and cave 10 Ganeshagumpha are known for their art treasure, these include sculptures and reliefs of historical importance. Cave 1 also known as Rani ka naur or the Rani’s chambers is extensively carved with embellished sculptural friezes. All these caves are located in Udaygiri. Khandagiri on the other hand offers exceptional views of the entire city of Bhubaneswar. Cave 3, the Ananta cave has various carvings of women, elephants, geese carrying flowers and atheletes.

The Hathigumpha or the elephant cave is also known for its inscription carved and written in Brahmi language by the King Kharavela himself. The king reigned the Kalinga dynasty during the 2nd century and it is believed that are inscriptions were carved during that time. The inscription is hanged in the south side of the cave. The cave faces the rock edicts of Asoka at Dhauli, which is situated six miles away from this cave.

The list of caves found in Udaygiri hills are as follows:

These are caves are among the most famous caves and they are often visited by tourists more than the other caves.

The list of caves found in Khandagiri hills are as follows:
Some of the caves in this hill are unnamed, yet they are important for their carvings and sculpture, a proof of their history.

The monument remains open from morning till evening. It can be said that caves open and sunrise and closes at sunset. The entry fees for Indian citizens, SAARC country residents, BIMSTEC (Bangladesh, Nepal, Bhutan, Sri Lanka, Thailand and Myanmar) residents are Rs 5.00 per person. For citizens of other countries and foreigners, the entry fee is Rs 100 or two dollars. For children below the age of fifteen, it’s free.